Details have a way of driving me bonkers until I get them sorted in my head, which makes me wonder why I find them so easy to leave out of narrative when I'm writing--but that's an entirely different issue. While working on Tin Man: Pirates of the Nonestic, geography was the detail that kept hitting me with a sledgehammer. I kept moving forward with the text, convinced I would figure it out after the first draft was done. I did, but I didn't expect the end result would take over a month to produce!

I didn't even know there was an Oz east/west issue until reading a couple of fanfics that did cute things with reversing the expected directions for the characters. The suns set in the east behind the land of the Winkies. The suns rise in the west behind the land of the Munchkins. When you spot enough fanfics taking the same idea and making it a theme there is usually a reason behind it. It really didn't bother me until I found the answer while researching the spelling of the names of neighboring lands. I tried to shrug it off with "okay, I was right," but that didn't sit well after I lurked in the fandom and found out people actually think the reversal is canon! ACK!

Since I found the answer in a five-second Google search, the ACK! turned into a rant. But I'm not that mean, and I needed to build better maps for Tin Man: Pirates of the Nonestic, so I decided to make maps for everybody. And offer the new maps at resolutions where you can actually do something with them, like read place names.

Let's start with Baum's canon. *Maniacal laughter* Sorry about that, but I don't think the man took internal cohesion in the series very seriously. But he is a writer, so his canon is the text. And since I am such a well-trained scholar….

"She was the Wicked Witch of the East, as I said," answered the little woman. "She has held all the Munchkins in bondage for many years, making them slave for her night and day. Now they are all set free, and are grateful to you for the favor."

"Who are the Munchkins?" inquired Dorothy.

"They are the people who live in this land of the East where the Wicked Witch ruled." -- The Wonderful Wizard of Oz by Frank L. Baum 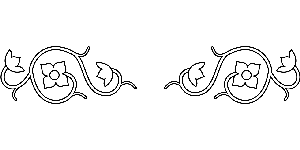 "But I thought all witches were wicked," said the girl, who was half frightened at facing a real witch.

"Oh, no, that is a great mistake. There were only four witches in all the Land of Oz, and two of them, those who live in the North and the South, are good witches. I know this is true, for I am one of them myself, and cannot be mistaken. Those who dwelt in the East and the West were, indeed, wicked witches; but now that you have killed one of them, there is but one Wicked Witch in all the Land of Oz--the one who lives in the West." -- The Wonderful Wizard of Oz by Frank L. Baum

These passages state unarguably that the Munchkins lived in the East and were ruled by the witch Dorothy's house landed on. Winkies live in the west. So where did the error creep in?

The Wizard of Oz - Frequently Asked Questions devotes two questions to this issue: 4.4. Why do some books have the Munchkin Country in the west and the Winkie Country in the east? and 4.5. Where can I get a map of the Land of Oz? They make the very logical case that Baum was first confused by a reversed slide of the map used in the stage play adaptations, then illustrators corrected the compass rose but not the ground that they were making a map of. And then writers after Baum referenced the bad map illustrations, and it snowballed.

Seeking to avoid the whole mess with what I'm writing, I grabbed a corrected map from Oz Central LLC that was put together by James Haff and Dick Martin. Plus I needed the surrounding kingdoms since Pirates is taking place out in the ocean. It's also safe to say in my Tin Man fanfics the suns rise in the east and set in the west and the compass rose is W - E not E - W. 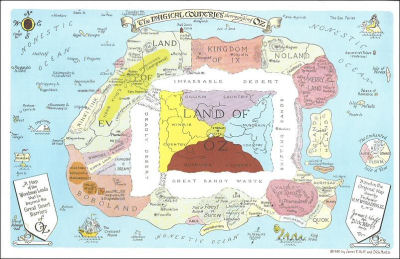 That settled, on to making my own map. First step is acknowledging that I adore Gregory Maguire's stuff, so I scanned in all the maps from Wicked, Son of the Witch, and A Lion Among Men. And then I started jumping up and down to resist the urge to go kick Maguire, Douglas Smith the illustrator, Joel Avirom or Jason Snyder who are listed as designers, or the editor for HarperCollins if he or she is not already listed. What ticked me off? There's no compass rose and Vinkus is left of Emerald City and Munchkinland is to the right.

SOMEBODY DECIDED TO FUCK WITH NORTH AND SOUTH INSTEAD! 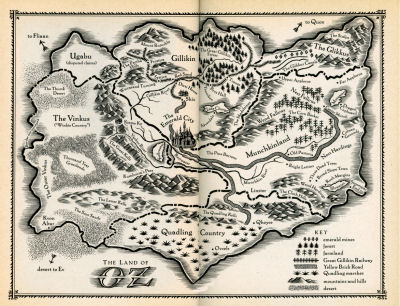 See the arrow pointed southwest labeled "desert to Ev?" *Sigh* You can see where James Haff and Dick Martin put it on their map. Quox is renaming of Quok, and Fliaan is a renaming of Phunnyland also known as Mo (I think Baum's first way of naming countries must have been to pick a letter on the top keyboard line and match it with a letter on the bottom line. And then somebody must have told him to really name the countries.) and their arrows are also pointed in the wrong directions. Disheartened, I double checked the next two books, hoping they had decided to fix it. I was disappointed. Southstairs inside Emerald City is drawn right next to the Shiz Gate, which heads north to Gillikin. 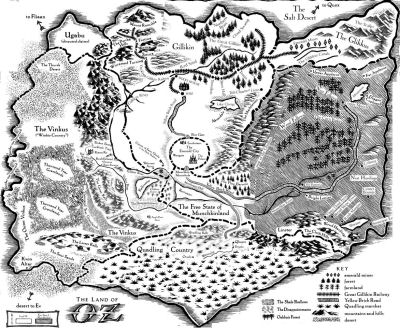 Okay, fine. If people want to continue using the geographical confusion, I also made a mashup of all three maps without the corrections. But nobody should care if I mess with the maps to get something I consider right for my Tin Man fanfiction. And North, South, East, and West are all going to correspond to how we are used to them working! 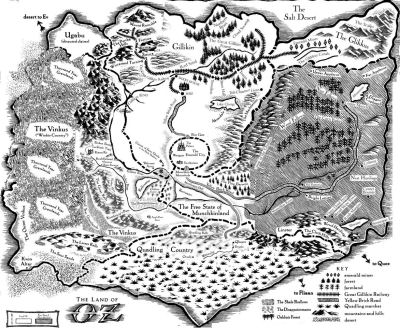 The Tin Man miniseries was careful not to use an Ozian detail that could be under someone's copyright, which I do applaud them for, also the variations on names gives the verisimilitude of passing time between Dorothy Gale and DG's adventures. However, I think the only instruction the visual background artists were given was "make it not look like Kansas," and that turned into lots of mountains, trees, and waterfalls on screen. I took the corrected mashup of the Maguire maps for the base and then added the details mentioned in the miniseries. 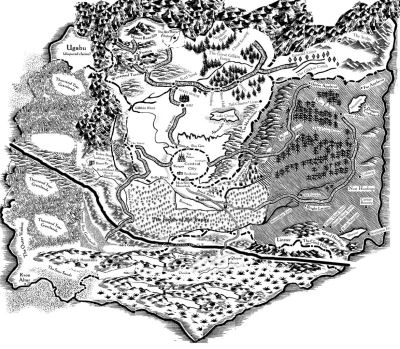 This was the source of much agony for the greatest portion of the month. All I have to say after this agony, if you find something wrong with this map, open your graphics program and fix it and never bring it to my attention. Otherwise, I'm liable to do something that makes the Sorceress' soul-suck look humane in comparison.

Fitting Dorothy and Ozma's Oz into Nonestica was much easier than dealing with the modern Outer Zone. 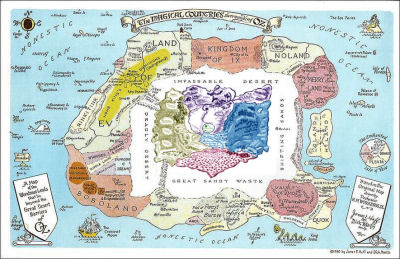 And then ripping that apart with the event I'm calling the Great Upheaval was way easier than dealing with the modern Outer Zone. 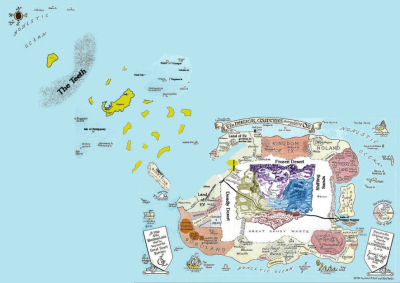 I finished my island maps in five seconds compared to the time spent on the modern Outer Zone map. 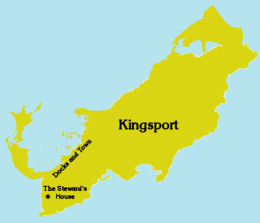 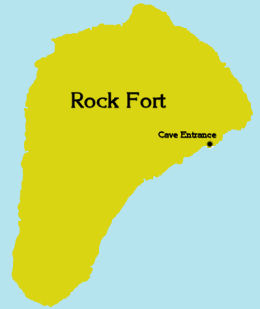 So while I would really appreciate a shout out for my hard work here, I don't expect it. The drawback I have found with this fandom is the tendency to ignore anything not provided on LiveJournal. But you're welcome to link back to this information and download any of the maps that you need.